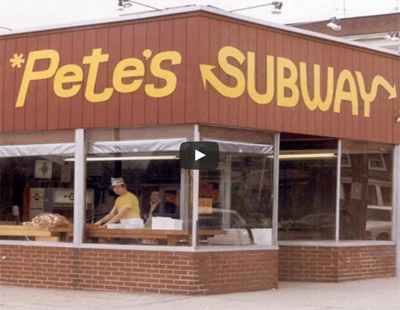 Learn the remarkable story of the SUBWAY brand, from the first shop in Bridgeport, CT in 1965 to becoming the world’s largest restaurant chain. Discover how providing our customers with an exceptional experience and a delicious, affordable meal was, and always will be, a vital part of our heritage 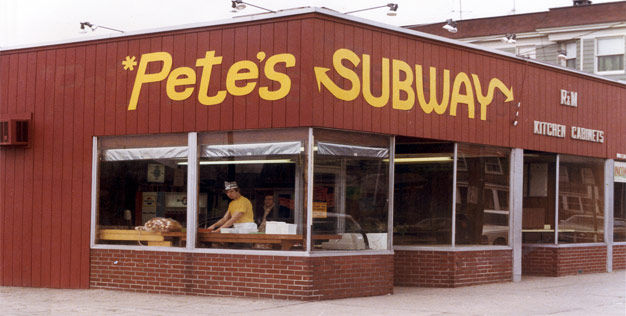 Back in 1965, Fred DeLuca set out to fulfill his dream of becoming a medical doctor. Searching for a way to help pay for his education, a family friend suggested he open a submarine sandwich shop.

With a loan of $1,000, the friend—Dr. Peter Buck—offered to become Fred’s partner, and a business relationship was forged that would change the landscape of the fast food industry.

The first store was opened in Bridgeport, Connecticut in August, 1965. Then, they set a goal of having 32 stores opened in 10 years. Fred soon learned the basics of running a business, as well as the importance of serving a well-made, high quality product, providing excellent customer service, keeping operating costs low and finding great locations. These early lessons continue to serve as the foundation for successful SUBWAY® restaurants around the world.

By 1974, the duo owned and operated 16 submarine sandwich shops throughout Connecticut. Realizing they would not reach their 32 store goal in time, they began franchising, launching the SUBWAY® brand into a period of remarkable growth which continues to this day. 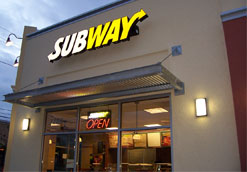 A Fresh FutureToday, the SUBWAY® brand is the world's largest submarine sandwich chain with more than 44,000 locations around the world. We’ve become the leading choice for people seeking quick, nutritious meals that the whole family can enjoy. From the beginning, Fred has had a clear vision for the future of the SUBWAY® brand. As we continue to grow, we are guided by his passion for delighting customers by serving fresh, delicious, made-to-order sandwiches.

PILE ON THE VEGGIES

The SUBWAY® brand teams up with the Partnership for A Healthier America to encourage kids to eat more vegetables. For the second consecutive year, the Produce for Better Health Foundation (PBH) names the SUBWAY® brand “Industry Champion” for its dedication to the Fruits and Veggies More Matters message.

The SUBWAY® Facebook page reaches 20 million fans in January. At the end of January, the Build Your Own Virtual SUBWAY® Challenge launches globally in 100 countries to inspire young entrepreneurs about owning your own business, with potential career opportunities with the SUBWAY® franchise. The challenge coincides with the release of an educational documentary, “SUBWAY® Restaurants: How a 17-year-old Built the #1 Restaurant Chain in the World through Franchising” by Young & Successful Media.

Lots of people are talking about SUBWAY®, as the brand receives recognition as the “Most Loved Fast Food Chain in the US” by YouGov’s BrandIndex Buzz Rankings. In June, SUBWAY® restaurants is the first quick service restaurant to receive the American Heart Association’s Heart Check Certification on a number of menu items and meals. SUBWAY® restaurants are now open in 100 countries.

With more locations than any other restaurant chain worldwide, the 35,000th SUBWAY® restaurant opens, including the 8000th non-traditional SUBWAY® restaurant. The chain receives the first ever “A” in the Eat This, Not That! Restaurant Report Card, as well as top honors from Zagat. Five more Eco Restaurants open, bringing the total up to 14, with other locations incorporating eco elements. Super food avocado is introduced to the menu.

The brand’s Chief Development Officer goes undercover on the hit TV show, “Undercover Boss.” Customers can now rise and shine with SUBWAY® restaurants, with 25,000 locations throughout the U.S. and Canada introducing the brand’s new national breakfast offerings. Options include a variety of sandwiches and melts, with the choice of egg whites or whole eggs, veggies, toppings, and sauces.

Toasted subs are introduced, a welcomed new option by customers looking for a warm, melty sub. A SUBWAY® restaurant opens at the South Carolina regional headquarters of Goodwill Industries. The restaurant is part of a program dedicated to helping people with barriers to employment learn the skills needed to better provide for themselves and their families.

GOIN’ TO THE CHAPEL

SUBWAY® restaurants can fit just about anywhere, from airports to zoos. This year, the True Bethel Baptist Church in Buffalo, NY opened a SUBWAY® restaurant. The franchisee, who is also the pastor of the church, uses the restaurant to teach job and professional skills to underprivileged youth in the community.

Centered around fresh, better-for-you sandwiches and salads, the brand introduces the 7 under 6™ menu, featuring seven sandwiches with 6 grams of fat or less.v

SUBWAY ON THE WEB

Looking to fit into spaces anywhere and everywhere, the SUBWAY® chain ventures into “non-traditional” locations such as gas stations, convenience stores, truck stops, and rest areas. The popularity of the chain continues and is featured in more movie scenes- this year in “The Coneheads” and “The Beverly Hillbillies.”

Students begin to enjoy SUBWAY® lunches in school cafeterias, as the chain participates in its first school lunch program. This year, the first SUBWAY® restaurants open in Japan and Saudi Arabia.

Kids can be excited about the brand’s new Kids’ Pak™, which includes a sandwich, drink, cookie, and a toy. The first SUBWAY® network TV commercial airs. SUBWAY® products are featured in the motion picture “Terminator 2: Judgment Day.”

The Cold Cut Combo is introduced and the chain’s 2,000th location opens. Entrepreneur Magazine® lists the chain as the number one franchise opportunity for the first time in their annual Franchise 500 ranking.

Continuing to grow at a rapid rate, 1,000 SUBWAY® restaurants are now open. This year, the chain opens its first locations in the state of Hawaii and in the Bahamas. Aloha!

The neighbors to the north now can enjoy everyone’s favorite submarine sandwich, as the SUBWAY® chain opens its first Canada location in St. John’s, Newfoundland.

The chain ventures into the international arena and opens in the Middle Eastern nation of Bahrain. Party Platters and the SUBWAY® Club sandwich are introduced.

FRESH OUT OF THE OVEN

SUBWAY® restaurants introduce freshly baked bread at U.S. locations. People begin to notice the remarkable growth of the chain since the first shop opened, with Entrepreneur Magazine® ranking SUBWAY® restaurants “Number One” in the sub sandwich category for the first time.

In just one year, the SUBWAY® chain opens an astounding 100 restaurants, with the opening of the 300th location.

The development of the SUBWAY® chain picks up, with the 200th restaurant opening in Renton, Washington.

The SUBWAY® chain introduces its New York City transit system themed mural as a décor item in a restaurant in Ithaca, New York.

The “Snak” sub sandwich is introduced. The name is later changed to the “6-inch.”

The chain’s flagship sandwich, the classic BMT, is first introduced. It is named for the Brooklyn-Manhattan Transit system, but later it is referred to as “Biggest, Meatiest, Tastiest,” in advertising campaigns. Also this year, the first SUBWAY® restaurant located outside of Connecticut opens in the state of Massachusetts.

DeLuca and Buck decide that franchising is the best way to kick-start the chain’s growth. The first franchised SUBWAY® restaurant opens in Wallingford, Connecticut.

The SUBWAY® name is used for the first time.

Partners DeLuca and Buck form Doctor’s Associates Inc. The name is derived from Dr. Buck, who holds a Ph.D., and the fact that DeLuca hoped to earn enough money in the sandwich business to pay his college tuition and eventually become a doctor.

How did the SUBWAY® chain start? Where did it all begin? A recent high school graduate, 17 year old Fred DeLuca, and family friend Dr. Peter Buck team up to open their first submarine sandwich shop in Bridgeport, Connecticut. Originally called “Pete’s Super Submarines,” they sell 312 sandwiches the first day. The average cost of a sub was between 49 cents and 69 cents.